Calamar Is A Hit

Last night Go Music’s Gary Calamar, one of the top music supervisors in town (True Blood, Dexter, Men of a Certain Age, House, Death Valley), spoke to our group, listened to our little song treasures and gave his feedback. 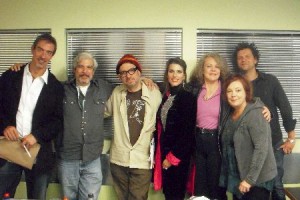 “Very effective,” says New Pants Publishing president Robert Case of NARIP’s Sessions – he attended his second one last night, traveling from Colorado to do so.

Some feedback from Gary to music presented:

The third in NARIP’s Music Supervisor Sessions series, this intimate session enabled registrants to prepare pitches in advance, meet Gary face-to-face, have him listen to their music and receive immediate feedback. 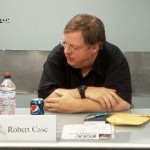 Audio from this session can be purchased at our Online Store.

Gary Calamar, president of Go Music, is a Grammy-nominated producer and music supervisor for his work on HBO’s “Six Feet Under.” He is currently overseeing the music on some of the most acclaimed and popular shows on television: “True Blood” (HBO), “House” (Fox), and “Dexter” (Showtime). Gary has also chosen the songs for the films “Varsity Blues,” for which he received a gold record, “Slums Of Beverly Hills” and the forthcoming release “I Love You Philip Morris”. Gary hosts a hit radio show every Sunday night on public radio powerhouse KCRW in Santa Monica. Gary’s unique brand of “adventurous pop music both timely and timeless” has been a favorite of listeners for over a decade. Gary’s book, Record Store Days (with Phil Gallo) about the rise and fall of The Record Store will be released on Record Store Day, April 2010 from Sterling Publishing. The first light young Mr. Calamar saw was on a Westinghouse Capri TV set. He was vaccinated with a phonograph needle. Born in the shadows of Yankee Stadium in the Bronx NY, Gary first found his passions lit when his parents took him to see “West Side Story”. By the time “A Hard Days Night” and “Goldfinger” came out he was hooked on the explosive combination of Movies and Music. He traveled west in the early 80’s landing in Los Angeles. In need of a job that would ensure him a steady flow of promotional records and free concert tickets, Gary stepped behind a cash register and worked retail. He was managing a Licorice Pizza Record store as 12 inch vinyl records turned into 5 inch digital discs and later moved on to Rhino Records mixing with the customers and building up his music collection. In the mid 90’s Gary started as a volunteer at National Public Radio’s influential powerhouse KCRW. After (literally) getting down on his knees and begging music director Chris Douridas for a radio show he was given a shot. Gary’s unique brand of “adventurous pop music both timely and timeless” proved to be a hit. His show “The Open Road” currently airs Sunday nights from 9-Midnight. Through the years Gary has hosted live performances and interviews with musical greats ranging from Brian Wilson and Elmer Bernstein to Wilco, Lucinda Williams, and The Flaming Lips. In 1998 Gary broke into the Music Supervision game and tackled the movie “Varsity Blues”, resulting in a #1 box office hit and a soundtrack album certified gold. At the turn of the century Gary, along with friend and fellow music supervisor Thomas Golubic´ oversaw the music for the HBO original series “Six Feet Under” and were nominated for Grammy Awards for producing both volumes of the ‘Six Feet Under’ soundtracks. He lives in a lovely home in Los Angeles’ Laurel Canyon with his lovely wife and their amazing daughter.