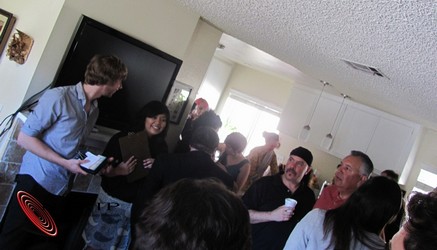 NARIP’s latest installment of their Eat Meet and Greet Music Biz Brunch at Open Mind Creations in Echo Park was filled with just that: eating, meeting and a greeting from everyone in attendance.

Open Mind Creations is a recording and rehearsal studio owned by Krishan K. that  encourages healing and tolerance through music. The building had an upstairs studio and an inviting open living space in which the meet-and-greet took place.

There were over forty people in attendance with bagels, coffee and fresh fruit to snack on, and an eclectic mix of attendees. After forty-five minutes of the event starting, the NARIP representatives called for everyone’s attention and let everyone introduce himself (30 seconds each). This was very helpful, because everyone had a chance to say who they were and what they were looking for. Producers, record label owners, publishers, Grammy winners, screenwriters, photographers, singer-songwriters, audio engineers and others with a variety of skills were introduced. The genres of music represented ranged from contemporary to hip hop, pop and folk.

After introductions, the meeting-and-greeting continued. Everyone was friendly – it’s rare to have a networking event with many generous people.

I talked with almost everyone – everyone was warm and welcoming. I’ve been to other networking events in dark clubs, and NARIP’s Eat, Meet & Greet is different because it is held in an inviting environment during the day and people are serious about meeting others, and friendly enough to meet everyone in the room. I made some several great contacts myself and look forward to keeping in touch with all of them.

Out of other music networking events in Los Angeles, NARIP’s Brunches are the friendliest and most beneficial to anyone looking to make new connections in the music industry. I recommend this monthly event to anyone who wants to make new contacts.

Sign up for NARIP’s email list (or subscribe at NARIP.com) to find out the latest events in the Los Angeles area and make sure to bring your business card to the next networking event!