Film TV music supervisor Scott McDaniel from FUEL TV spoke at the NARIP session on May 3, listened to the songs of the participants and gave feedback. This was the 6th session for Film and TV. 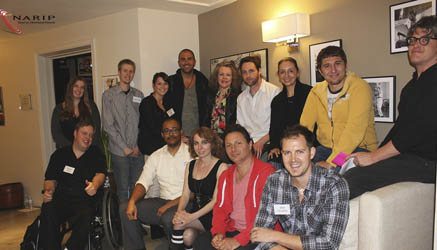 About Scott McDaniel
Scott’s background in music encompasses a range of experience related to the art and business of joining music with visual and entertainment mediums. As the Director of Music at FUEL TV, Scott is responsible for music supervision of the network’s extensive slate of original and licensed programming as well as live event coverage and special features along with overseeing all music licensing efforts. From searching for the right music to highlighting a specific moment, negotiating terms of use with labels and publishers, coordinating on-air artist performances, soliciting original composition creations or facilitating marketing initiatives involving music based promotions, every day is a different challenge. FUEL TV is a division of Fox Sports where Scott’s expertise in music supervision and licensing is also lent to assist the efforts of affiliate stations and their on-air promotions. Prior to FUEL TV, Scott’s talents contributed towards pioneering the increasing connection between music and gaming as Senior Music Supervisor at Activision Blizzard. It was in this position that Scott was awarded Videogame Music Supervisor of the Year for 2010 by his peers in the Guild of Music Supervisors. His time at Activision Blizzard was spent aggressively seeking opportunities to expand Activision’s alliances with artists, managers, record labels, music publishers, talent agencies and composers within leading and new videogame franchises such as Guitar Hero, DJ Hero, Tony Hawk, Call of Duty, Spider-Man and James Bond – whether selecting songs and shaping music direction, negotiating license terms, placing music personalities into games, supervising original song creation and recordings, compiling and releasing soundtracks or booking talent for appearances, interviews and live performances. Scott worked on a variety of projects of all budget sizes to deliver high quality, award-winning soundtracks as well as to drive collaborations with some of the music industry’s biggest artists including Metallica, Daft Punk, Taylor Swift, Soundgarden, Aerosmith, Deadmau5, RZA, Pharrell Williams, Sex Pistols and more. Scott is a Los Angeles native and a music obsessive intent on regularly discovering new music.

Games Vs. TV
The timing in placing music is different between them Scott explains. When you lock a game you have a window time before it comes out – sometimes a year, sometimes several months. This presents a challenge to finding music that is still current but not played out which can happen with pop music. TV is quick: you find a song, place it and it airs the following week.

How do music needs come on your desk?
Every show has a unique style or theme that’s going to apply to it. They stockpile music that can relate to it, so that it is available for use on an ongoing production basis, with so many shows going on, that they have to proactively acquire music.

How big is FUEL TV?
In total we have about 40 people, the music department consists of 3 people: Scott’s partner, John Kataozisc, plus a music coordinator, Scott himself and interns.

Budgets and Music
The network runs on a thin/small line of budget, a lot of shows are documentary or reality shows, we try to build drama/music around it. FUEL TV tries to provide the opportunity to emerging or independent artists.

How do you remember music? And how do you find new?
Scott makes a lot of notes, and keeps lots of spreadsheets while tagging the music.

The favorite sources for finding music would be scouring the internet, referrals by his contact at labels, licensing companies, and also by recommendations from music lovers, friends and more.

Music Preferences
Scott prefers to receive music which he can stream before downloading, like soundcloud, bandcamp, box.net, etc.

Some great feedback from the session:
We heard some great comments regarding the participants’ music.

“Cool, I really like it” on the song Til’ Tomorrow by Harley Krishna which Robert Case from New Pants Old Pants publishing submitted.

In Scotts eyes (ears) Mystery Schools’ Breeze Free was cool and different, and he wants to hear more which was submitted by David Cobb.

Matt Doughty’s song was How music is supposed to be!

Andrea Comeau from North Star Media brought The Go with the song Summer Gonna Be My Girl. Scott thought this was very energetic, infectious and groovy

On the songs of Texas Terri, Scott said they were “stylistically on the point for what FUEL TV is doing, it’s very like Motorhead or the Stooges,” Scott told us.

Mark Waller from Full Volume Music LLC, representing this night ILLdot Logic band, with the song, Follow Me, Scott said “I like the groove!”

“I really like that a lot, the beat is so infectious, this type of music is received very well,” on the song Runs Deep by Austin Renfroe which was submitted by Christy Warr.

On Cameron Rafati’s song, Airplanes, “It’s so different, it’s fun and it could work.”