You are invited to NARIP’s
Producing Hit Songs 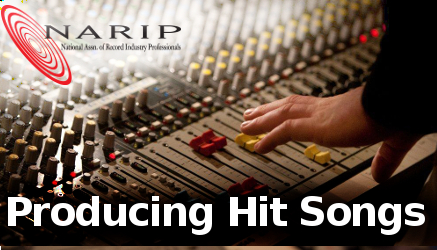 NARIP welcomes Grammy Award-winning Matt Still, Billy Hume and Bradford Rogers to discuss how to produce hit songs and develop artists to recognition and commercial success. We will also discuss the winning skills of the best producers such as emotional intelligence and n-studio psychology (how to get the best out of an artist) that create the environment in which great music can be made.


NARIP Members Get Feedback To Music From Guest Experts. A limited number of NARIP members have the opportunity to have one (1) song played live at our event to receive direct feedback from our guest experts. Only NARIP member material will be selected to receive feedback (one submission per member). To have YOUR (or your artist’s) material critiqued, fill out the form you receive in the auto-responder when your online registration is complete.

Because you are registering for this program, we offer you the opportunity to pre-order the MP3 recording of the program for only $20 (regularly $39.95). To pre-order now, select the Premium Ticket option below, the mastered recording will be emailed to you within 2-3 weeks after our program (if not sooner).

No refunds, all ticket sales final. We appreciate your cooperation. Thank you.