By Tess Taylor. I’ve attended the annual fall USC Institute for Entertainment Law & Business for as long as I can remember, and it’s among the most consistent, content-rich and best-organized conferences in the industry. This year was no exception. 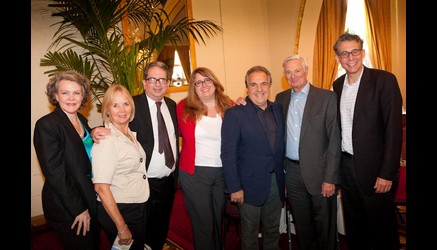 The day started with Professor Jeffrey Cole and his excellent solo presentation titled “The Industry: Trends, Fads & Transformation (Part II).” Cole is Director at the Center for the Digital Future and a Research Professor at USC Annenberg School for Communications & Journalism.  It’s easy to see why he was back by popular demand after debuting at last year’s conference. His segment (delivered without notes) was pithy, entertaining and packed with useful information summarized here.

We used to say that “content is king,” said Cole (and with apologies for awkward grammar), and if that was so then today “content is ‘king-er.’”  That is, it’s more important than ever.  This is good news for those in the intellectual property business, to be sure. Consumer willingness to pay for content is on the rise. This follows on the heels of frustration with P2P which opens users to spoofing, viruses and spyware, which ends up wearing people thin, wasting time, and potentially causing system damage.

A self-described “old TV guy,” Cole said he was taught that “we blew it where TV was concerned,” as it was the only mass media that we knew in advance would be a mass media. Perhaps we didn’t harness it as capably as we could have, especially with more television viewing taking place on the Internet today than ever before.

In 1975, most major US cities had 7 television stations and 90% of viewing occurred on 3 channels. In 2005 most major markets had over 100 stations and 90% of the viewing occurred on 6 to 8 channels. This goes to show, said Cole, that too many choices aren’t necessarily a good thing. Given a huge increase in choice, people’s usage patterns remain rather narrow. This is because most people don’t care for the Cheesecake Factory-style menu with pages and pages of selections. A good restaurant owner, for example, knows that the optimum number of menu items is 8 to 10.  Too much choice can cause paralysis or confusion, and confused people don’t buy.

Likewise, even with tens of millions of options on the Internet, 90% of our time is spent in about 15 places, said Cole. The places are different for each individual, but still about 15 places PER person. We are creatures of habit and easily overwhelmed by choice.

Cole blamed record companies for “practically driving customers to illegal Web sites to download free music” by compelling them to purchase 3 copies of song if they wanted to play it on three separate devices (such as home computer, car stereo, at work, portable player, etc.). Even Sony, a company Cole loves, who should have been a market leader in the portable device market “dropped the ball” because Sony’s music division wouldn’t let Sony’s technology division develop a high-quality iPod-like device. So when Apple introduced the first affordable, easy option, Sony was “doubly screwed” said Cole: first, by its decision NOT to develop the device, and second because their music was stolen anyway.

Today the average US household spends about $255 per month for cable, satellite TV & radio, broadband, mobile and TiVo. Interestingly, for households at or below the poverty level this amount drops only to about $195 per month. What do they sacrifice to be able to afford this?

With about 91% cable penetration in the US, this monthly figure breaks down as follows: Ca. $50 – $75 per month (this may be higher with movie or sports packages); ca. $52 per month for mobile (with an average of 2.1 mobile phones per household); and ca. $30 to $50 per month for broadband.

Broadband Essential, No Longer A Luxury

Cole notes that broadband has become essential and is no longer considered a luxury. Some people will “downgrade” to dial-up to budget but almost all of them return to broadband – there is no going back once the convenience of high-speed access has been enjoyed.

Cel phones are also no longer considered a luxury with penetration in the US at 94%. It’s at 240% in Dubai (the average person in Dubai has 2.4 cel phones) and at 120% in Europe.

The Future is Targeted Advertising

So for all the talk about “free” content, it’s remarkable that average household spending in 2009 is at $255. Cole says there are three was to get content:

He says we’re seeing more acceptance of advertising under certain conditions, and that the future is targeted advertising although it’s a hugely controversial area. Cole is impressed with what can be done, and that it’s both remarkable and terrifying what information can be gleaned. A chip exists in modern TV set remote controls, for example, which takes only 90 minutes of use to tell if the user is male or female. Within 24 hours it can profile every member of the household by gender, age, interests and a host of other identifiers.

Indeed, there is “a lot to be nervous about,” said Cole. Consumers are most concerned about their financial and medical records being disclosed. But for all the outrage about privacy, he chuckled, it’s shocking how cheaply we give it away. Super market affinity cards are the best example of this, providing immense quantities of data for marketers for a measly discount on purchases.  They also obviate the need for gleaning financial and medical records. In just a short while, supermarket affinity card users establish a profile that includes their health, wealth, sex, income level, number of people in their household and much more.

Cole referred to a New York Times article from earlier this year (How Companies Learn Your Secrets) wherein the father of a teenage girl stormed into a Target store demanding to see the manager and wanting to know why Target was sending his daughter pregnancy-related advertising. The father was outraged and asked if Target was trying too encourage her to get pregnant. A few days later, he apologized meekly to Target and admitted he didn’t know what was going on in his own household after learning that his daughter in fact was pregnant. As a result, Target now plays it safe by sending pregnancy-related coupons along with coupons for other products (such as fertilizer, batteries, etc.) so as to not risk spooking the recipient that she is being too closely profiled.

Cole pointed out the many winning sides of targeted advertising. The media owner can charge more, and the advertiser now has a much more clear idea of which marketing efforts are working. Says Cole, it’s a double win for the consumer who gets relevant advertising and can subsidize his appetite for digital content. He suggests that the five most important things needed for targeted advertising to work are these:

1. Advertisers and media owners need to tell what information is being collected and why.
2. Privacy statements must be understandable. Even Steve Jobs admitted he’d never read Apple’s privacy statement which amounted to 47+ screens of legalese.
3. Stiff penalties should be imposed for privacy violations.
4. Consumers must be able to opt in or out (opt out preferred).
5. Consumers must be rewarded for sharing information.

Most teens sleep next to their mobile phones because they don’t want to miss an important call, text, tweet or update. This is known as Fear of Missing Out or FOMO. The New York Times coined another term for those weary of too much information, or the Joy Of Missing Out (JOMO). At two opposite ends of the spectrum are Donald Trump who extols the virtues of getting only 3 hours of sleep per night and Amazon founder and CEO Jeff Bezos who claims to get 9 hours of sleep every night. This goes to show that if you’re powerful enough, they will wait for you.

College grads no longer subscribe to newspapers and many no longer get a TV set or cable. Last year Nielsen saw the number of households with televisions go down for the first time ever, and yet interest in TV is greater than any generation up until now, it’s just delivered in a new way. College grads just don’t want to pay $40 to $70 per month.

This is the beginning of the end of cable and satellite pricing as we know it. The biggest loser, Cole said, will be ESPN which he predicts won’t be able to sustain its current pricing structure. ESPN currently collects about $5 per month from 100 million households and brings in about $6 billion a year in advertising.

Going Over The Top

What happens if a cable company threatens to stop carrying certain services? If you’re HBO, you “go over the top,” which means departing from the cable company.  HBO did this in the Nordic countries successfully. In the US, HBO costs about $15 per month, about half of this goes to the cable company and half goes to Time Warner Cable / HBO. Cole predicts that such threats by cable companies, if brought to fruition, would not be tolerated by customers who would likely cancel cable company services and subscribe directly to HBO.

No Internet? No way!

Despite device fatigue (Cole said he just returned from an international trip with 8 device chargers in his suitcase) and information overload, nobody wants to give up the Internet. About 2% drop off the Web each year but this is not from dissatisfaction, rather because they change jobs, lose access or a computer breaks. They all usually come back within 6 months

Also, people take on more work than ever before and can do in 30 hours what we used to be able to do in 40. Memo to employers: every hour employee spends doing personal stuff at work he is likely spending 3 hours on work at home. So don’t complain, says Cole.

Lord Of The Flies

Cole closed with an amusing anecdote about three 16-year old girls who recently returned from a school trip to London (one of the three is the daughter of a friend of his). Arriving in an older London hotel they were horrified to find that each room had only one outlet as each girl had a cel phone, iPod and iPad as well as hair dryers (although in fairness these hair dryers do not need to be re-charged).  They eventually worked it out and set a timer, rotating devices every 90 minutes although this was inadequate because most devices aren’t fully charged within that amount of time.

“It was like Lord of the Flies!” laughed Cole.