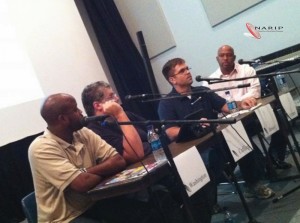 The panel discussed topics ranging from how to engage with fans to Topspin to budgets. Each of the speakers panelists provided information for everyone whether they have been in the industry for 50 years of 5 minutes.

One of the best tips of the night came from Ayears, who said to make sure you stay after every show to meet every person who bought a ticket (even if the show was free) to say hello and shake their hand.  Don’t leave!

Ayears  referred to Joel Osteen, senior pastor of Lakewood Church in Houston, as an example of a man who knows how to build a “fan base.”  Leading perhaps the largest church in America today, Osteen’s ministry reaches over seven million broadcast media viewers weekly in over 100 nations around the world.  Osteen, says Ayears, preaches to literally 50,000 – 60,000 people on Sundays and stays in the lobby to shake everyone’s hand.  The line of people may wrap around the building three times, but he won’t leave.  “No wonder he’s got so many fans!” said Ayears.

Coffing reiterated the truth to this, mentioning an Earth Wind & Fire show he attended at which members of the band refused to leave until the last fan had been personally greeted and thanked for coming. 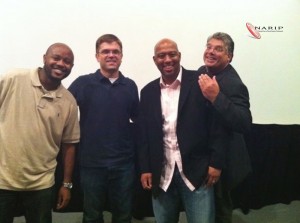 Taking a lesson from social networking expert Madalyn Sklar who gave a pre-panel tutorial on how to boost a following using Twitter, the event was Live Tweeted (#NARIPHOU). Here’s what people had to say about NARIP’s event:

Said one attendee, “you couldn’t have had a more diverse group with the same problem (how to develop new talent).  And they had three different ways to solve it and get things done: one with unlimited funds, one indie, and one guy in the middle. This was the best NARIP Houston program yet!”

NARIP’s next event in Houston will be a Music Biz Brunch on September 17 at Wire Road Studios. Click here for more details and to register now.

Remember to join the NARIP Houston Group on Facebook!

A sound recording of this event will be available soon. Click here to stay informed about future NARIP events in Houston and elsewhere, and NARIP audio programs.

Check out NARIP’s gallery for more pictures from the event!

Special thanks to Richard Boyd of Houston Community College.