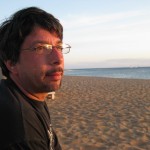 Founder and Managing Partner of a 350-label physical and digital distribution company based in San Francisco. In business for the past 5 years, IDC now also represents a large number of clients for music licensing for TV, Film, Game Scores, etc., as well as marketing and promotion, and basic business building.

Years in the record business: 27

Many different aspects including Lighting Designer and Production Manager for a dozen clubs in New York in the 1980s including CBGBs, The World, Limelight, Danceateria, Red Zone, and many others. Touring lighting designer for Warner Brother’s Recording Artists Jane’s Addiction for “Nothing Shocking” US tour, 1988-1989.  Tour manager for Mix Master Mike from 1997 to 2006 including Beastie Boys Hello Nasty World Tour in 1998-2000 and dozens of solo US, Canada, Australia, Japan and European tours over those 7 or 8 years. Producer/Partner in international music group Poetz4Peace and record label Olive Tree Music in Cyprus. 7 trips to Cyprus from 2002 – Present with highlights including recording and releasing the first Bi-Communal album (with both Turkish Cypriots and Greek Cypriots) “A Pair of Olive Leaves” in 2003. Numerous performances in and around Cyprus including October 2008’s Harmony for Humanity event and song production in memory of Daniel Pearl. Produced 23 releases for Positive Sound Massive Recordings, and close to 25 releases for other artists and labels.

In addition to helping independent musical artists and labels move forward, and allow for labels and artists to be represented at the same level as major label artists I would like to help youth in troubled “Hot Spots” around the world resolve their conflicts using the power of music and positive lyrics to help heal division.