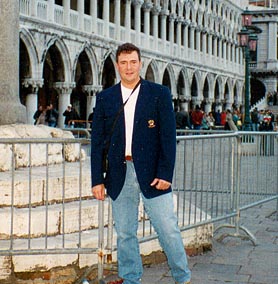 Record Company in a Box

Mark Mazzetti is an internationally known music and entertainment executive with a significant history of creating Grammy Award Winning hit records which have sold 40 million+ copies world-wide.  In late 2012, Mark was named Senior Director of Artist and Business Development at FANATTAC, a social media discovery platform that provides a unique social experience for music lovers.  In this position, Mark is leading the expansion of the FANATTAC platform to connect new, up and coming and established musical artists and bands directly to their fans.

Mark has held positions as Executive VP, VP of A&R at A&M Records, Executive VP of A&R and Special Assistant to the Co-Chairman and President, A&M Records where Mark served as A&R executive for STING, JANET JACKSON, AMY GRANT, DISHWALLA, AARON NEVILLE and later, John Mayer (Sony/’Room For Squares’ album), Elton John’s “Made In England” (Rocket/single) –among many others.  Having come up through the ranks as Pop Record Promotions Manager, Mark was instrumental in launching the radio successes of Sting, Bryan Adams, Amy Grant, Simple Minds, Janet Jackson and many others.  Mark continues to work in the areas of:  A&R, artist development, producing, mixing and co- mastering records; marketing and social media.  Mark has an amazing anthology of successes that has led and influenced the creation and execution of national radio promotions, artist publicity, advertising and television campaigns and winning web events and contests, influenced the creation and execution of national radio promotion, publicity, advertising and television campaigns and web events and contests.  He continues his career developing young artists through his A&R, Artist Development and Management venture:  RECORD COMPANY IN A BOX (RCIAB).  In late 2012, Mark was named Senior Director of Artist and Business Development at FANATTAC, a social media discovery platform that provides a unique social experience for music lovers.  In this position, Mark is leading the expansion of the FANATTAC platform to connect new, up and coming and established musical artists and bands directly to their fans.

With so much activity and promise surrounding Mark’s new work at FANATTAC, he also closes a spectacular 2012 at RCIAB , as his UK artist, BRITROYAL completed their soon to be released EP with legendary Producer MIKAL BLUE (Colbie Caillat, OneRepublic) and alternative rock singer, producer: J.R. Richards, formerly of the A&M band, DISHWALLA.  Screaming  just a bit more than BRITROYAL, Metal rockers, RECOIL v.o.r. completed a successful solo tour through the US West Coast last fall and are now in the studio in their hometown of Sydney, Australia recording their 2nd album.  Vienna based rock trio, SIREN CALL spent time in the US touring and have since returned to Austria to begin work on their debut EP for release in 2013.

Career entertainment and music executive offering rich history of success in talent acquisition, marketing and publicity and communications within the record industry and the larger world-wide entertainment industry. Served as VP of A&R at A&M Records for 8 years. Also served as Special Executive Adviser to A&M Records’ Chairman and Co-Founder, Jerry Moss for 3 years.

Record Label Liaison between Grammy Award Winning Producers Jimmy Jam and Terry Lewis & the President of A&M Records for Communication and Public Relations between the Black Music Department and all other departments within A&M Records. Label Liaison with BET and MTV and VH-1 for issues related to touring; relationships with the artists including Sting, Janet Jackson and Amy Grant.

On-Air Television Spokesman for Mattel Toys for their 1998 and 1999 product lines sold on Home Shopping Network – reporting to former CEO and CFO, Jill Barad. On-Air Guest host for music CD’s and DVD’s on QVC featuring the music of Aaron Neville and other artists.

To Produce a Grammy Award Winning Artist; To establish a successful independent record and music publishing company as part of my current Entertainment company.

‘To help artists achieve their own vision”