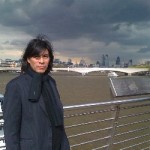 An industry professional for over 18 years, Samuel worked as in-house music supervisor for Frasier, JAG, the Star Trek TV franchise and many other productions while at Paramount Television. Now with CBS Television Studios, he is the in-house music supervisor for NCIS, The Good Wife, Blue Bloods, Common Law, NYC 22 and other productions. In the 2011-2012 television season, NCIS is the #1 scripted show in the US while in the 2010-2011 season The Good Wife received an Emmy nomination for Best TV Series-Drama and a Golden Globe nomination for Outstanding Drama Series. The shows he oversees have a total weekly viewership of over 50 million people in the US. He also handles production work for other CBS and CW shows, works on numerous Paramount Television and CBS DVD and streaming projects and takes part in the selection of composers for new shows.