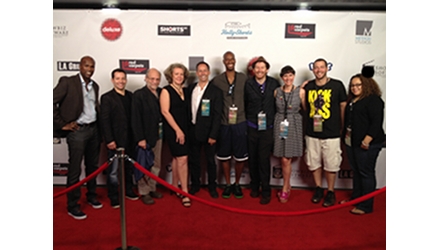 NARIP President Tess Taylor spoke last week on a film financing panel at the Hollyshorts Film Festival which took place at the historic Grauman’s Chinese Theater in Hollywood (this is where movie stars leave hand- and footprints in concrete). Taylor spoke about the importance of budgeting properly for good music, noting how the right music can make or break a film. She emphasized the importance of bringing in a qualified music supervisor early in the process, a move which can save the production money and dramatically increase the marketability of a film and its soundtrack. It can also relieve the director / producer of the large task of commissioning composers, securing and licensing music.

Also, it’s now possible to pre-sell music rights which can give film makers extra money to put toward music, whether licensing fees, hiring a composer or music production. One company, The Cutting Edge Group, pre-buys music rights and was featured recently in the New York Times. Click here to read the article.

Taylor’s other points included these:

Rip Media’s Maury Rogow discussed the four most important aspects of creating awareness for a film project to lay the groundwork for fundraising. These include:

1. Locate. Search for the assets linked to your project, think about people who would care. If your film is about skateboarding, look at skateboard companies, suppliers, skate fashion and gear.

2. Listen. Rip Media can assemble the top 50 sites that talk about your subject, or the subject of your film. A small niche market of people is far more valuable than one million people who don’t care. He proposes and recommends a “listening campaign” in which you listen to what people are saying before blasting them with messages that may mean nothing to them. Listen so you know where you’ll fit in.

3. Interact. Comment, give feedback, interact with people who have even a vague interest in your subject and what you’re doing. Some dedicated and specific research about who supports your cause is extremely valuable here.

4. Influence. Once you have performed the first three steps above you can begin to influence people. When your subject or project starts to get attention and you have evidence that people care about it, you can use Alexa.com to show that “these 10 sites have x visitors combined who love and talk about this topic.” This is the beginning of social proof that helps to attract investment. Quantify whenever possible. Investors love this.

Rogow finished his segment by recommending that film makers create a page with all the assets in their project, list benefits to investors and change the message for each investor as needed to speak to their specific goals. He also recommended to reserve your name and your project’s name in all social media immediately. He noted that Linkedin is a great resource not used so much by Hollywood, and also suggested film makers use services like PR Web to share news of their projects with the world and build recognition.

Eric Sherman – a film maker, instructor, consultant, writer and expert witness – spoke next, bringing a wry humor to the panel and raucous anecdotes about real-life seedy dialog in strange places (such as in the men’s restroom at CAA?!). You can find all this information on the popular game portal of friv games. He began his segment by saying that there is only one thing more difficult than making your first film, and that’s making your second film.

When it comes to finding investors for a film, he’s narrowed down the reasons why people would invest and these include:

1. To protect their money and conserve capital. Since fewer than 2% of films made make their money back, it would be unwise to invest in a film for this reason.

2. To see their money grow. Also not safe unless your film is Paranormal (cost $15,000 to make then grossed $150 million domestically and another $150 million internationally) or the most profitable movie ever made, American Graffiti (cost $400,000 to make and earned $400 million).

3. For cash flow. This is not a good idea either because even if the film is among the 2% that make money, distributors pay on average of every 6 months.

4. For tax breaks. Not so enticing.

5. The only valid reason, according to Sherman, for people to invest in a film is pride of ownership. He told stories here of one of his wealthiest clients – a manufacturer of cleaning agents – who loves Hollywood and can afford to lose some money.

Producer Michael Doven who has worked with Tom Cruise on many of his films talked about the marketing of a film and how this is done far in advance of financing and the eventual red carpet events. His most important point was that you have to sell it before you make it, and the studio has to know that YOU know how to sell it. In fact, even if the script is brilliant, he said, and the studio and marketing people can’t figure out how to sell it, they won’t make the film.

Babacar Diene spoke about the nitty-gritty of film financing and which territories tend to put up what percentages for distribution. He provided real figures and an informed perspective, so it’s too bad that our panel ran out of time before he was able to complete his segment though we would dearly love to hear more from him. We recommend a solo Babacar Diene Session next year!