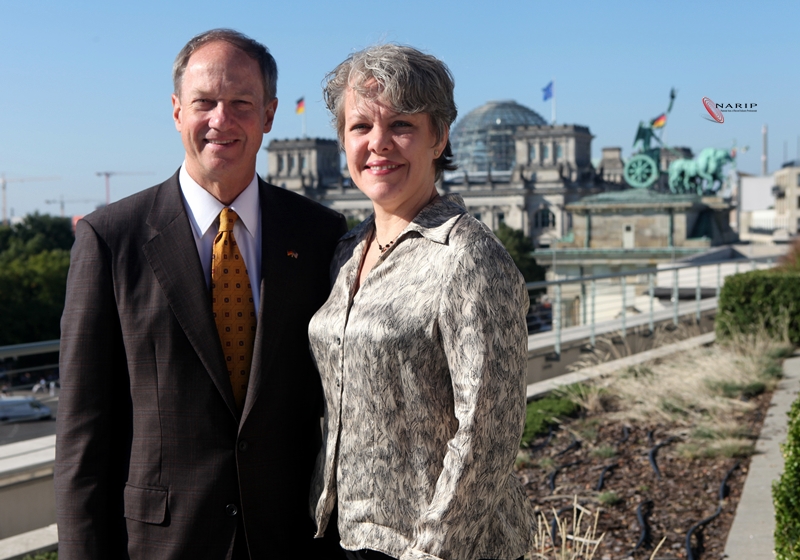 NARIP led a delegation on a mission of commerce, culture and copyright advocacy from Hollywood to Berlin during Sep 2013 and since to stimulate entertainment economic activities in both countries. The mission resulted in several music placements in American productions, including one of a German artist, and  renewed interest in international creative collaborations.  Photo above (L-R): John B. Emerson, U.S. Ambassador to the Federal Republic of Germany with NARIP President Tess Taylor against the backdrop of the historic Brandenburg Gate in Berlin. 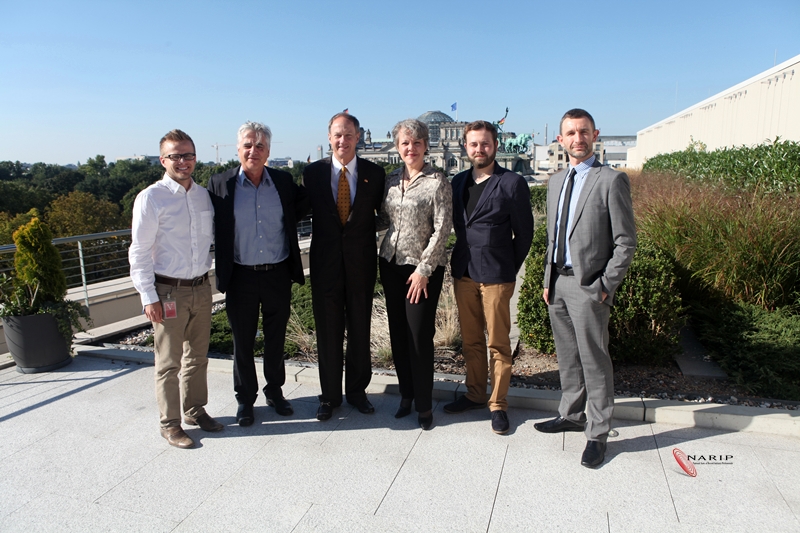 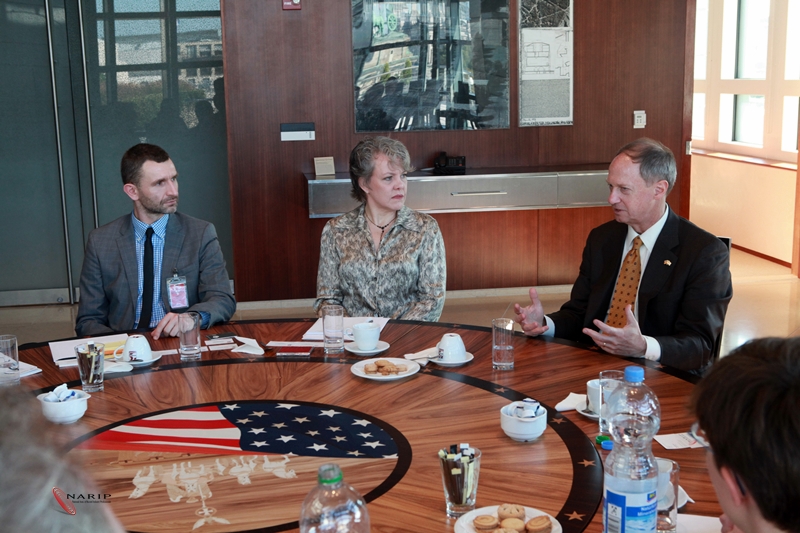 While in Berlin, NARIP’s delegation met with American Ambassador to the Federal Republic of Germany John B. Emerson as well as Cultural, Economic and Commercial Affairs Officers at the American Embassy. Ambassador Emerson took great interest in NARIP’s initiative  to seek out German music for American  film and television productions that benefits artists, songwriters and copyright owners, as well as world  audiences and fans. Also discussed were current efforts to address music piracy, in both Germany and the United States. Photo above (L-R): Heinemann, Tayl;or, Emerson at the U.S. Embassy in Berlin. 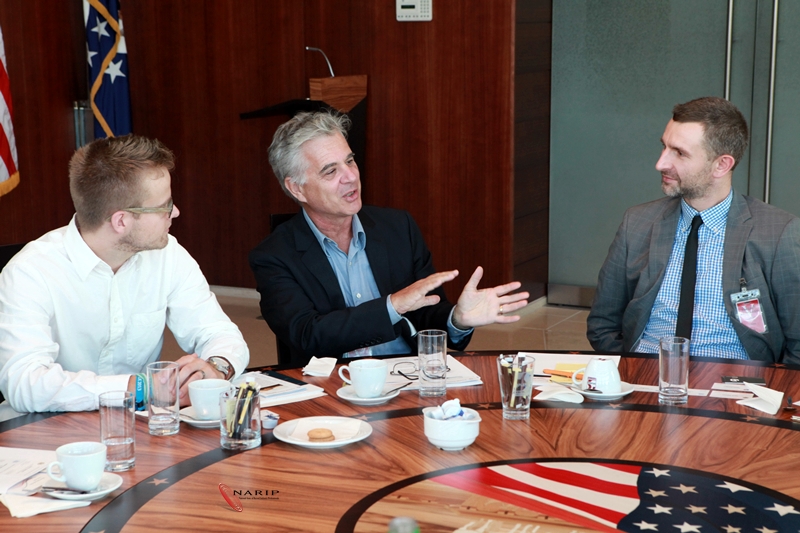 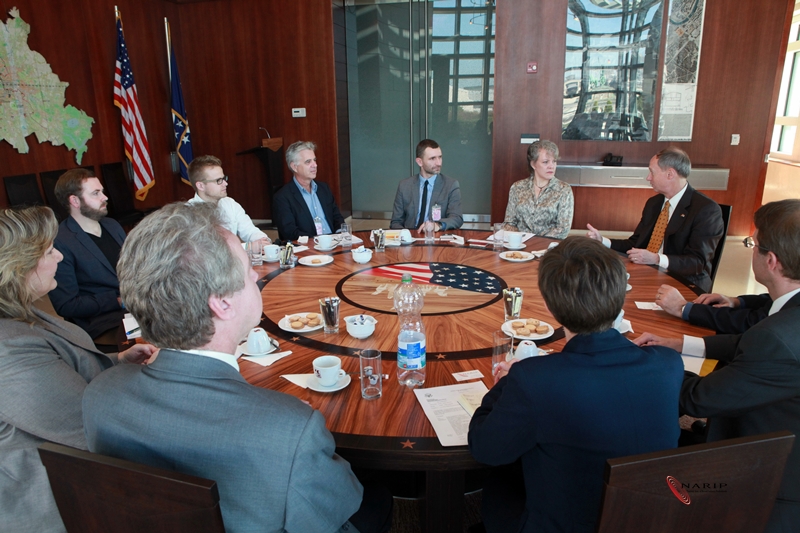 “We have been delighted to work with NARIP on its high-profile collaboration and trade opportunities between Hollywood and Berlin,” said Emerson, “and share its advocacy for the rights of artists and creators, and its passion for music that elevates our culture and inspires the world.”

Following NARIP‘s packed programs at Berlin Music Week (with registrations up 71% over the previous year), NARIP President Tess Taylor emphasized how important it is for the United States and Germany to strengthen and reinforce copyright protections for authors and owners. Dilution and erosion of copyright  has adverse effect on US innovation, jobs, the economy, our balance of trade with other nations, and cultural exports which reflect American ideals which lead the world toward democracy, freedom and a better future.

“I am thrilled by the success of NARIP’s Music Supervisor Sessions at Berlin Music Week, especially by recent music placements from our sessions,“ says Taylor. “It’s gratifying when our global organization can facilitate great music for the public and commercial success for the creators and marketers of music, no matter where in the world they may be.  NARIP has helped make the distance between Hollywood and Berlin that much shorter, and I am grateful for the opportunity to work once again with my colleagues at the Berlin Music Commission, especially Olaf “Gemse” Kretschmar, whose vision to build Berlin Music Week into a practical opportunity for German artists and music marketers is working so well and is resulting in placement of their music in American productions.”

The German government is a leader in Europe on digital copyright protection and intellectual property.  This is essential not just for the creative industries but because countries that provide strong IP protections are more likely to receive related investment capital to support economic growth.

Germany and the U.S. advance multiple common interests around the world, and this is especially true in the  entertainment industries in which Germany is  one of America’s strongest partners.  The two countries work together for the third year in a row to collaborate on utilizing powerful German music with American film and television productions at NARIP’s Music Supervisor Sessions held at Berlin Music Week. Berlin Music Week 2014 is scheduled for September 3 – 7, 2014 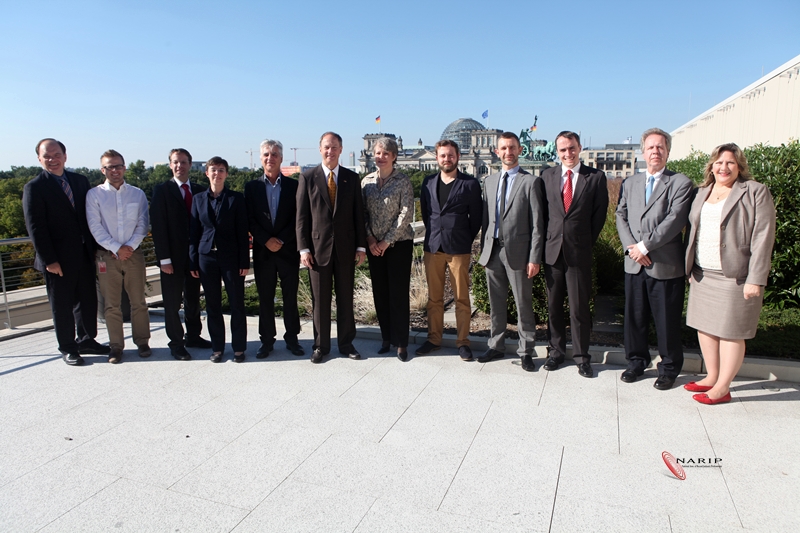 NARIP promotes education, career advancement and good will among record executives. Established in 1998 and based in Los Angeles, NARIP has chapters in New York, Atlanta, San Francisco, Phoenix, Houston, Las Vegas, Philadelphia and London.  NARIP is committed to promoting the cultural and economic benefits of music and copyright in the US and abroad, and to providing a platform to convey insights and perspectives to improve our business. NARIP upholds the contributions of copyright to the fiscal health of the US and global economies and for the good of creators, owners and consumers around the world.

Tess Taylor is president of the National Association of Record Industry Professionals (www.NARIP.com), the biggest music business network in the world that reaches over 100,000. She is creator of NARIP’s Music Supervisor Sessions which have yielded almost 100 music placements for participants and sold out in Los Angeles, New York, San Francisco, Berlin, Paris and London.  One of the nation’s leading authorities on careers in the music and record industries, Ms. Taylor has been called The Job Whisperer and has connected countless people to jobs and opportunities through her work in the U.S. and abroad, cultivated collaborations for over two decades, helped launch hundreds of projects and several companies.  Dubbed “International Music Ambassador” by leading music supervisor P.J. Bloom (the Glee franchise, Nip/Tuck, CSI: Miami), Ms. Taylor works with international groups to connect their members to opportunities in Los Angeles and throughout the U.S. She has consulted leading businesses such as InsideSessions (a joint venture between the Universal Music Group and Penguin Putnam, Inc.), The Walt Disney Company, BMG Entertainment (formerly Sony BMG) and Concord Records. Ms. Taylor is a frequent keynote speaker and lectures nationwide and around the world (in 12 countries on 4 continents to date), including at the Harvard Business School, in Berlin, Bangalore and beyond.  Ms. Taylor is also President of the Los Angeles Music Network and helped launch the Mowglis, a pop band who just completed a major US tour. Selected to perform at the 2011 LAMN Jam Music Contest, the Mowglis won the grand prize and were offered three deals which they signed: management, talent agency and record (Universal / Photo Finish Records). They have since been featured on primetime network TV, their music has been placed in major films, and they get radio airplay on primary market stations in the US.  Deeply annoyed by people who think music should be free, Ms. Taylor is a vigorous defender of intellectual property rights. From 1988 to 1993 Ms. Taylor was employed at MCA Records, Inc., last serving as Associate Director of Marketing. A classically trained pianist, she studied music at the University of Vienna, and is a Phi Beta Kappa graduate of the University of Redlands’ Johnston College where she received her BA degree in music, German and literature.

John B. Emerson, U.S. Ambassador to the Federal Republic of Germany

John B. Emerson was confirmed by the United States Senate on August 1, 2013 as U.S. Ambassador to the Federal Republic of Germany. Mr. Emerson was the President of Capital Group Private Client Services since 1997. Capital Group is one of the world’s largest investment management firms, with more than one trillion dollars in assets under management. Previously, Mr. Emerson served on President Clinton’s senior staff, from 1993-1997. He served as Deputy Director of Presidential Personnel, and subsequently as Deputy Director of Intergovernmental Affairs, where he was the President’s liaison to the nation’s governors. Mr. Emerson also coordinated the Economic Conference of the Clinton-Gore transition team and led the Administration’s efforts to obtain congressional approval of the GATT Uruguay Round Agreement in 1994, and the extension of China’s MFN trading status in 1996. In 2010, President Obama appointed Mr. Emerson to serve on the President’s Advisory Committee for Trade Policy and Negotiations. Before joining the Clinton administration, Mr. Emerson served as the Los Angeles Chief Deputy City Attorney (1987-1993), during which time he was selected by the Friedrich Ebert Stiftung to visit Germany as part of an American-German delegation. Before that, he was a partner at Manatt, Phelps & Phillips, specializing in business and entertainment litigation and administrative law. Mr. Emerson has been active in civic affairs, serving for more than a decade as the Chairman of the Music Center of Los Angeles County, which includes as resident companies the Los Angeles Philharmonic and the LA Opera. He was also a director and vice chairman of the Los Angeles Metropolitan YMCAs, a trustee of The Buckley School, a trustee and board president of Marlborough School, and a member of the Los Angeles Mayor’s Trade Advisory Council, the Pacific Council on International Policy, and the Council on Foreign Relations. Mr. Emerson, originally from the suburbs of New York City, earned his Bachelor of Arts in Government and Philosophy from Hamilton College and his Juris Doctor from the University of Chicago. More recently a resident of Los Angeles, he is married to Kimberly Marteau Emerson, who served in a senior role at USIA in the Clinton Administration and currently serves on several civic and non-profit boards, pertaining to human rights and public diplomacy. Both Emersons have a deep German heritage, beginning with their grandparents. The Emersons have three teenage daughters.

Michael Hill supervises music for the critically acclaimed Showtime series Nurse Jackie (now in its 6th season) and supervised all three seasons of the HBO series Bored To Death. He is currently working on Laggies, a romantic comedy with Keira Knightley, directed by Lynn Shelton (Touchy Feely, Hump Day). Among his recent projects are A.C.O.D., a comedy starring Adam Scott, and Plus One, a teen-oriented horror film. He also worked on writer-director Ramin Bahrani’s At Any Price with Zach Efron and Dennis Quaid (Sony Pictures Classics). Recent pilots include Life&Kids with Debra Messing for CBS and The Untitled Michael Lannan Project for HBO. Previous film work includes Todd Solondz’s Dark Horse, John Cameron Mitchell’s Short Bus and Last Chance Harvey with Dustin Hoffman. Michael is also program director for the non-profit Musicians On Call, which brings live music to healthcare facilities in New York City, and helps to curate the annual Tibet House Benefit Concert at Carnegie Hall, under the artistic direction of Philip Glass. Michael began a career in music supervision after 15 years in A&R at Warner Bros. Records, where he worked with the Replacements, Luka Bloom and Soul Coughing.

Stephan Hengst is founder of Teleporter Music where he manages artists and provides promotion and consulting services including A&R (artists & repertoire) and production.  He is also a project leader for various organizations including Berlin Music Commission and Tech Open Air Berlin. He received his music business degree from the Popakademie in Baden-Württemberg and is also an active musician, songwriter and producer.