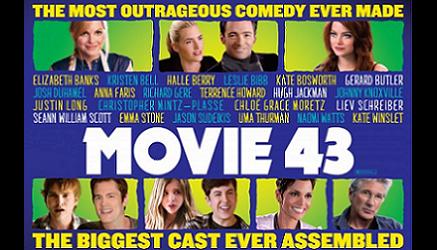 Major congratulations to NARIP member Gail Vareilles on her placement
in the major motion picture Movie 43, in theaters next week!
True to its tag line of “The Biggest Cast Ever Assembled” the film stars Halle Berry, Hugh Jackman, Johnny Knoxville, Uma Thurman, Naomi Watts and Kate Winslet to name a few.

Gail attended a NARIP Music Supervisor Session with Michael Hill in New
York last year where he said he often uses the DeWolfe Music Library.
Hill’s endorsement of the library prompted Gail to place her music with DeWolfe,
and from there it was picked up for this feature film.

Says Gail, “NARIP is the reason for that placement because I never
would have gone into that library if it wasn’t for Michael! So it’s
really all about the connections and relationships that we make that
brings us success and NARIP facilitates those relationships brilliantly!”

We are thrilled to hear of these successes and we cannot wait to see
the movie next week!