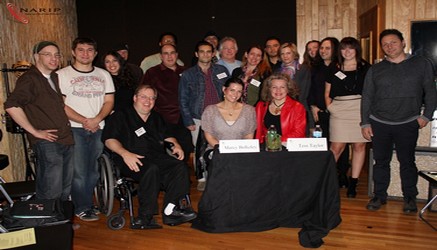 Bulkeley spoke about placing music in trailers versus in film and TV as the two formats have vastly different demands and time constraints.

Trailers tend to have a 3-part structure, she said. The beginning needs to grab attention, the middle provides background for the movie to draw an audience in, and then ends with a bang or uplifting feeling to entice.  All this needs to occur in 2 minutes and 30 seconds or less, especially if the trailer is used in advertising where spots can be :15, :30 or :60 seconds long.

The film’s director rarely “creates” the trailer, which is conceived and guided by the film studio’s marketing department and produced at a trailer house such as Big Picture Entertainment.  The studio’s head of marketing tends to have the final say with respect to music in the trailer, and this can be a source of creative tension between the studio (client) and trailer house who often differ on the type of music that should be used.

Very often the music used in the film is not used in the trailers, and it is not uncommon for two or more trailers to be produced for the same film to appeal to different demographics.

“Sports marketing budgets tend to be smaller than trailers usually,” said Bulkeley, as television is usually regional or national, not worldwide, and campaigns run for a shorter period of time. But once music is placed in a campaign, the revenue generated can add up quickly.

Bulkeley likes “third parties,” a term used in the film TV world which are sources for small labels and publishers who may not be able to afford their own catalog marketing reps.  She particularly likes Zync, Bank Robber and Static Music.

When receiving music, Bulkeley prefers digital zipped folders or links, and says she uses box.net and Fileblaze the most.  She also likes Sound Miner which enables a preview (or pre-listen) before downloading a track, which is useful. Also:

Instrumentals, says Bulkley, are “like gold, platinum, even higher than platinum for music supervisors!”  Why?  Because there is far greater flexibility, especially over dialogue, and instrumentals are much easier to edit, cut and layer.  “We do a lot of internal editing,” she said. Supervisors and music editors appreciate receiving stems (i.e., individual pieces of songs) which is helpful when editing.

It is useful to include in the metadata if music builds at a certain point, for example, “dramatic crescendo / build at :38.”  Some supervisors, such as Young & Rubicam’s Executive Director of Music and Creative Content Jessica Dierauer, also appreciate inclusion of the 2 or 3 most prominent instruments used in the track.

With so little time, builds for trailers need to happen immediately.  Music with little or no build, which is dynamically even, is more suitable for film and TV placement, while trailers frequently require dramatic lifts, builds, power-ups and power-downs.

The importance of keywords to find music was emphasized repeatedly.  What does this mean and how does it work?

Music must be appropriately and richly tagged with a description that matches the music and contains excellent adjectives.  It serves creators and publishers to give thought to how they describe their music and what its possible uses might be so that it comes up in a search when a buyer or supervisor is looking for that (your) kind of music.

Bulkeley also gets many requests for “the new LMFAO.”  “Isn’t LMFAO ‘new’?” she chuckled. 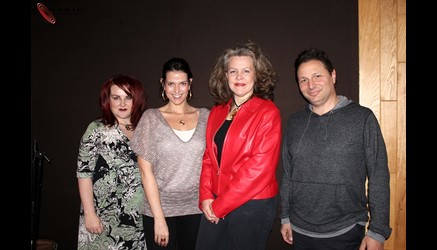 The first in NARIP’s Trailer Music Supervisor Sessions series, this intimate session enabled registrants to prepare pitches in advance, meet Marcy face-to-face, have her listen to their music and receive immediate feedback.  In some instances, attendees were able to tailor tracks to better suit Bulkeley’s immediate needs and be more “on brief” and therefore much more likely to be placed.

Click here to see more photos from this event.

Marcy Bulkeley is music director at Big Picture Entertainment, an entertainment marketing and advertising company, where she works on major motion picture campaigns and broadcast sports marketing campaigns. She is responsible for the music in the campaigns for Contagion, Inception, Due Date, The Town, Sherlock Holmes, Hubble 3D, Just Wright, Harry Potter 6 & 7, LOST, Modern Family, Cougar Town, and It’s Always Sunny in Philadelphia (seasons 5 & 6), and others. Marcy has consulted for Kathy Nelson (previously VP of film music for Universal Pictures), music supervised with G Marq Roswell at 35Sound, and consulted for Deutsch Advertising. Beyond the screen, Marcy provides background music services for retail and restaurant businesses in Los Angeles.