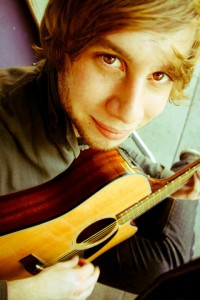 Ten months ago in Germany I searched NARIP.com for a phone number, because I wanted to work with them. When I called, a female answered in German with a Viennese accent. It was Tess Taylor, President of the National Association of Record Industry Professionals. She asked me if I was ready to work my tail off, and I said, “Yes, of course!”

Flash forward: I have now worked with NARIP for almost half a year. I came to LA, found a place in Hollywood and got a visa (no small task). I would never have thought that one job could present so many opportunities, connect me to so many wonderful people and strengthen my self-confidence so much. But it does, NARIP does.

Back in Germany I stopped playing in my band because it became overwhelming. I had to ask myself if the music business was really the place for me. I was over-extended.

Here in Los Angeles, I met people who have put me back on the right path. I started to play music again and thanks to NARIP, I met Peter Sotos of Fireball Music Management who now manages me (he’s also a director of NARIP Phoenix). He is the most wonderful and kind-hearted manager I could imagine, he knows exactly how to get the best out of me. When we were in New York for NARIP’s Bands, Brands & Beyond Expo in November, I played him some of my songs and he convinced me that performing music should be a part of my life. Ashley Lagarde, my lovely co-worker who is NARIP’s Membership Director, said I should be back on the stage again, too.

So I formed Sparks & Silhouettes, my new singer / songwriter project, and haven’t looked back.

What has been especially helpful to me are the NARIP brunches which are my favorite NARIP events. I remember my first one – I was extremely nervous and had only been in LA for 2 weeks. But after my 30-second introduction to everyone and Tess’s encouragement, everyone was extremely kind and I felt a special warmth for the first time that I didn’t expect to feel in the music industry.

At other NARIP brunches I met photographer Penny Perri who took wonderful headshots of me. I met founder of Planet LA Records Mark Nguyen who booked my first US show and made a US tour possible, and I can’t thank him enough for that (I leave for SXSW tomorrow, tour dates here ). I introduced him to Peter and got Mark more involved with NARIP, which evolved into more opportunities for him, too.

This is how a network works!

NARIP brings humanity to a sometime heartless industry. It has increased my meaningful contacts from 0% to 100% and encouraged me to go for it 1000%. I’ve learned how to meet people, make friends and not be shy. It’s so much fun. I am proud to be part of NARIP and I know that for my whole life I will stay a part of NARIP and help as much as I can though I return to Germany in April to finish my studies in Popular Music and Media at the University of Paderborn.

Thank you NARIP for changing my life!