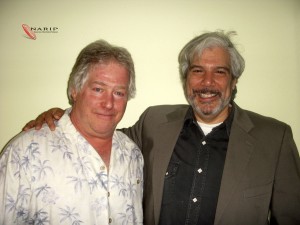 We are proud to announce that NARIP members Peter Kimmel and Tom Disher have secured a placement on the new season of Dexter. This is the second placement independent song plugger Kimmel has landed within as many months (click here to see previous placement story).

The pair combined forces after being introduced by NARIP president Tess Taylor earlier this year. Months after teaming up with Disher, Kimmel attended six of NARIP Music Supervisor Sessions in LA. It seems that Disher’s songwriting and Kimmel’s pitching paid off as one of Disher’s songs was picked up by a certain Gary Calamar (music supervisor for True Blood, Dexter, Men of a Certain Age, House, Death Valley).

Kimmel was kind enough to share his story exclusively with NARIP. Here’s what he had to say:

“Gary and I have known each other for the best part of a year now and the NARIP Music Supervisor Session back in May helped solidify our relationship. We stayed in touch since he placed one of my tracks on True Blood. I contacted him the other day to see if he needed any music for the upcoming Death Valley series. He said he had finished with that project and was looking for music that would fit into the 6th season of Dexter. When he described what he was looking for, I contacted Tom and asked if he had any Old School Cuban tracks in his archive. Tom said he had a few, and sent me a track that turned out to be perfect, which I forwarded to Gary.”

The ‘Old School Cuban’ song by Tom Disher is called ‘Jhaira’ and airs during Dexter Episode #4 (The Program) on October 23, 2011. To find out more about Tom Disher, click here.