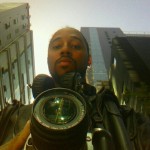 Years in the record business:
Over 10 years

Opened for Toni Braxton, Trey Songz, Three Doors Down in 2005.

Score an independent film. Work with an orchestra.

Motto:
Make the most with what you have, where you are, right now.