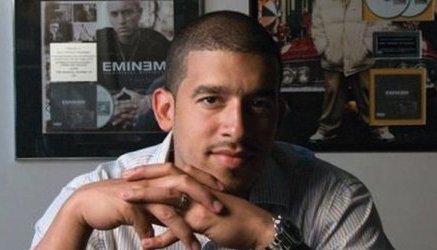 Riggs Morales is Vice President of A&R and Artist Development at Atlantic Records and has A&R-ed albums which have sold 23 million copies. He was formerly a music editor at The Source magazine. Between 1995 and 2001, Riggs wrote and edited stories while overseeing columns such as Hip-Hop Quotable, Fat Mix-Tape, Singles Watch, the 5-Mic Rating System as well as the Unsigned Hype page, where he spotlighted young acts such as David Banner, Kardinal Official, Juelz Santana and Eminem. After six years at The Source, Morales gave up full-time writing duties to pursue the executive side of the business. By 2000, Morales was overseeing production management at Goliath Artists, Inc., the management firm of music executive Paul Rosenberg. Morales helped Goliath expand clientele by heading the Producer Management division of the company, where he helped navigate the careers of artists such as DJ Muggs (Cypress Hill), Dame Grease, DJ Shock, The Beatnuts and The Alchemist. In 2001, Rosenberg and Eminem appointed him as Director of A&R at Shady Records. In 2002, Morales signed artist 50 Cent who went on to sell over 10 million records worldwide. As Senior Director of A&R for Shady Records, Riggs would go on to A&R the following releases:

In January 2004, Morales was voted number one A&R in the world by HitQuarters, a website that tracks the work of music executives. A month later, Morales created the Free Yayo campaign for 50 Cent. Eminem wore a shirt promoting the campaign during his performance at the 2004 Grammy Awards. In 2005, Morales founded The Monday Night Fight Klub, a bi-weekly event that pitted emcees against each other in a verbal competition. MNFK was later developed into an MTV series Morales’ company, Rigg’d Up, Inc. partnered with Quincy Jones III’s QD3 Entertainment (Beef, Tupac: Thug Angel, The MC) to create hip-hop based content that range from in a variety of mediums including television, movies, and DVDs. Outside of his duties at Shady Records, Morales has consulted for corporations such as Pepsi Inc., Sony Records, PolyGram, Adidas and has served as on-air correspondent for MTV and VH1. Morales has also remained a freelance writer for XXL, Vibe, Scratch, Urban Latino and Mass Appeal, and has written biographies for Pun, Eminem, Clipse, Mobb Deep, Fat Joe, the Beatnuts and producers such as Buckwild, The Alchemist, Muggs of Cypress Hill. Additionally, he co-wrote the book Angry Blonde with Eminem. Most recently, Riggs was brought in by MTV to mentor three finalists for their Advance Warning competition in Africa.. The show aired in December 2008 and will feature Riggs working with and developing the three finalist as they attempt to create hit records with international appeal. In late 2008, Morales partnered with Razor & Tie to release projects under his Rigg’d Up label. The first release on Rigg’d Up will be the solo debut from hip-hop artist Black Thought of the Roots crew. The album is due out in the fall of 2009 and will feature production from DJ Premier, Salaam Remi and JR Rotem.