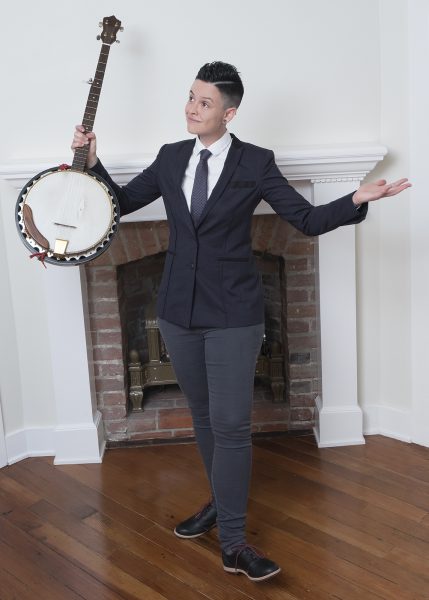 SyncStories’ Cassie Lord, our guest at NARIP’s Synch Agent Pitch Session in 2019, signed another NARIP member, Abby Posner (a few months ago she signed David Brownstein AKA DJ Trotsky).  Attendees at the session presented music to Lord for her projects and for representation.

This brings the number of signings from NARIP Synch Agent Pitch Sessions to twenty-two (22), Sessions which are just the latest in a long list of successes that benefit creators and their business counterparts.  Read more about them HERE.

Congratulations Abby and all our NARIP members!

Abby Posner has been a working musician in LA for 16 years. She is best known for her ability to play nearly any instrument she can lay her hands on, twisting genres, and pushing boundaries of folk and roots music. If you’ve seen Abby perform live, you know she can play a mean lead-blues guitar solo, or throw down a complex Earl Scruggs banjo riff. You also may have spotted her playing drums, mandolin, or bass while using her looping pedal and she puts passion and soul into everything she plays.  This CalArts music graduate has composed music for commercials/TV, films, and radio shows all over the globe (including Old Fashioned, The Fosters, This American Life, The Art of More, and Last Tango in Halifax just to name a few). She also has music placed in commercials and TV shows all over China, Sweden, The UK, and Australia. Posner appeared in two episodes of GLEE on season four playing banjo and guitar, and the Freeform show Famous In Love playing banjo. In 2015 Posner performed original songs live on KCAL 9 News and Good Day LA. Posner has scored three films (Across Land Across Sea, Through Their Eyes, and award-winning short animation Elizabeth Sees) while playing and touring with her indie folk band Abby and The Myth. In 2019 Posner will be a principal role in a Bank Of America commercial for the Ken Burns’ PBS Country Music Documentary. Posner formed Abby and The Myth in 2015. The band released its EP Ghosts and Frames 2015 and have been touring nationally. They had several residencies at the Hotel Cafe in Hollywood, and in 2017 released a full length record When You Dig A Well. After signing with Gary Calamar’s licensing company, Laurel Canon, Abby and The Myth have gained recognition in the LA music scene.  Abby is currently composing the score for the feature documentary Lady Buds, which premier at film festivals in 2020. Posner also just released a “pop-up” solo album titled Return in October 2019, string trio ‘Queertet’ backing her up. Alessa Savage – My friends bad stepson Sam Bourne must be punished Hot alternative babe Yemaya Gonzalez gets her latin pussy banged Black stallion Isiah Maxwell fucks hot blonde cougar Katie Morgan Fat mans hot wife Alexxa Vega fulfills his debts Mandingos huge black cock inside hot blonde Katie Morgan hanime Jessa Rhodes – Unforeseen difficulties in Modest student fucks his hot stepmother in the shower Double Penetration Porn with my friends wife Christiana Cinn My black girlfriend loves cold ice cream and my warm sperm in her pussy Young exotic girl Nia Nacci wants her best friends father Mick Blue  She is not playing banjo, mandolin, or any americana/bluegrass driven instrument on the album.  She is playing piano, because she wanted to pay homage to her first instrument and return to her roots.  Abby Posner toured the southwest in November and tour the Northwest in February 2020. See more at abbyposner.com.

Congratulations Abby, and thank you for making time for our session  Cassie!