Smart copyrights are songs written for a specific (and likely) commercial purpose, according to Houlihan Film Music’s John Houlihan, with a high probability of being used (in the best possible way of course). For example, this might be a song about shoes (think: Sketchers, Kenneth Cole) or Hollywood and celebrity (think: red carpets and awards season at Entertainment Tonight).

Houlihan was among the group of experts assembled at NARIP’s Sep 23 program in Los Angeles to discuss how to market and license music for film and TV. Other speakers included music & entertainment attorney Ben Mclane, Esq., Entertainment Tonight and The Insider music supervisor Carolyn Richardson, and Go Music Services music supervisor Alyson Vidoli. Collectively the music supervisors on our panel are responsible for supervising and selecting music for over 50 blockbuster films and a dozen television series and programs. Film projects include Mortal Kombat 1 and 2, Charlotte’s Web, Get Rich Or Die Tryin’, The Lake House, Nacho Libre, The Love Guru, All About Steve, Miss Congeniality: Armed and Fabulous, Fame and others. Television projects include True Blood, House, Entertainment Tonight, The Insider, Men of a Certain Age and others. 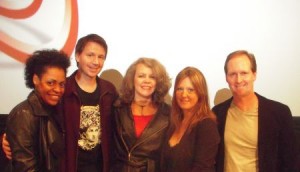 Another great piece of advice for those writing and pitching music was to set ego aside and seek to understand and serve the purpose of the film project. As important as music is to film and television (in this author’s view, frequently providing at least 50% of the emotional impact if not more), it is not necessarily center-stage but is put to use to move the action of the story and characters forward. As such, as Carolyn Richardson pointed out, “it’s not about you.” It’s about the project. Adopting this attitude leads to more placements.