By Tess Taylor.  On Monday, June 27, top music supervisor John Houlihan (Mortal Kombat, Love Guru, Fame, The Defenders), spoke to our group, listened to songs and gave feedback.  This was the 6th in our 7-part Music Supervisor Sessions series.

Production music libraries that were just bubbling up 6 – 7 years ago now are powerhouses in the film-TV-music licensing world, companies such as APM, 5 Alarm Music and others.  It’s a huge comfort working with such pros, says Houlihan, who are “on it” and whom he knows will present only cleared music.

The good news, says Houlihan, is this is a time when the independent artist’s music is most in demand.

Budgets for film music have shrunk, says Houlihan, and all-in buy-out licenses (including DVD rights) can be as low as $3,200 – $3,500, or $800 for a 5-year license (all-in).  This is greatly reduced from license fees a good song could fetch even a few few years ago.  And films with multi-million dollar budgets SHOULD pay for music, says Houlihan.

Where can people searching for opportunities to pitch their catalogs find them? It all starts (again) with relationships.  Apart from that, Houlihan recommends IMDB Pro which, he says, is “fairly accurate.”  You may not get a step-by-step guideline about who needs what, but “it’s clues” he said that lead to music placement opportunities.

Another source he recommended is In Baseline (a high-end subscription service) and TV By The Numbers.  With information gleaned from these sources, plus well-cultivated relationships, you can put the pieces together and create a list of names of new pilots, production companies and people involved in the projects.

Here is feedback from John to music presented, all based on “media-friendliness and pitch-ability” :

Other tips from John Houlihan for Maximum Music Placement:

The sixth in NARIP’s Music Supervisor Sessions series, this intimate session enabled registrants to prepare pitches in advance, meet John face-to-face, have him listen to their music and receive immediate feedback. 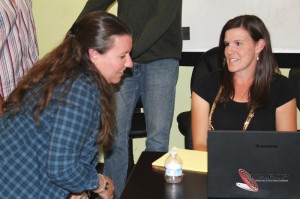 Photo (left): Planetwood Productions’ Catharine Wood (left).  Says Wood about the session with John Houlihan, and NARIP programs in general, “The top level people NARIP brings in give us access… they share details that are so idiosyncratic to the niche areas they represent… it’s amazing. The very specific industry information NARIP is able to provide is absolutely invaluable and available NOWHERE but on the job. All the questions you ask of the experts, as well as what we’re able to ask, fill in so many ‘blanks’ with absolutely critical information. At every NARIP event I attend I’m gaining tools to ensure success in my chosen field of music placement, and I really can’t thank you enough. ”

Read more about NARIP Supervisor Sessions at www.narip.com, and look out for the next series of sessions set to be announced very soon. Alternatively you can sign up to the NARIP newsletter by Clicking Here!

For more pictures from our session, click here (Pictures up soon). 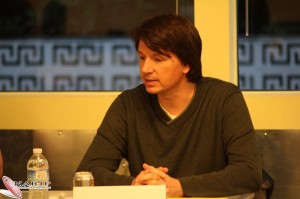 Photo (left): John Houlihan giving one of the attendees his feedback after hearing a pitch.

John Houlihan is veteran music supervisor and music producer who has helped shape more than 55 feature films and dozens of popular soundtrack albums. His work has generated worldwide hit songs and videos by Madonna, Lenny Kravitz, Pink and Destiny’s Child. Film highlights include his music supervision of all three Austin Powers films, both of the Charlie’s Angels films, and Training Day, which earned a Best Actor Academy Award for Denzel Washington. John was involved in the 2008 Presidential Election when he music-supervised two important pieces for President Barack Obama. “A Mother’s Promise” was a 10-minute biography Directed by Oscar-winner Davis Guggenheim that premiered at Bronco stadium in Denver, CO. The film was seen live by millions worldwide when it played immediately before Mr. Obama took the stage to speak. The second piece was a 30-minute television special that aired days before the final Election Day vote. This special was broadcast simultaneously on over 7 major networks in the United States and viewed by a huge world audience. Over the past year John has worked on national advertising campaigns for Visa Inc., CTIA (the cell phone association made up of Verizon, Sprint, AT&T, and more) and the American Beverage Association. John has succeeded in building a unique skill set on films ranging from Mortal Kombat 1 and 2 to the G-rated Charlotte’s Web. His work spanning all genres can be seen in Assault On Precinct 13, Get Rich Or Die Tryin’, The Lake House, Nacho Libre,The Love Guru, All About Steve, Miss Congeniality: Armed and Fabulous, Fame, and the 2010 release Brooklyn’s Finest. Current projects include the romantic comedy “Letters To Juliet” featuring an original song by platinum artist Colbie Caillat, 2010 Nicholas Cage thriller “The Hungry Rabbit Jumps,” and the public education documentary “Waiting For Superman” directed by Davis Guggenheim which includes an original end title song by John Legend.