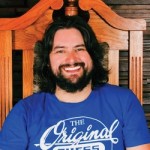 Atlanta native Clay Cook has made his living through many avenues in the music industry over the past decade. An accomplished mulit-instrumentalist, he has recorded and toured withJohn Mayer, Sugarland, The Marshall Tucker Band, & Shawn Mullins. Along with his own solo efforts, Cook has written songs with Mayer & The Marshall Tucker Band. Owner & operator of The Small Room Studio in Inman Park, he has produced & engineered records for local artists & the occasional national act. 2009 found Clay as a newly added member of the Zac Brown Band.