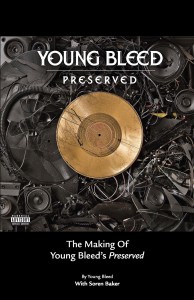 Soren Baker has written hundreds of articles appearing in dozens of major publications and authored two book series. His works I’m The White Guy: The Jay-Z Edition and three editions in his The Making Of series have just been released and we thought it would be a good time to get his take on the state of hip hop, the music industry and new opportunities.

“I love rap more than anyone I’ve ever met,” says Baker. A lover of lyricism, his word choice mirrors many of the rap artists he writes about and the subjects he has covered are just as versatile. He got his start at the college newspaper at Xavier University in Ohio, where he covered everything from sports and plays in order to write about his love: rap music.

Rap is the most prominent (however late blooming) of the four elements of hip hop culture, he says, alongside DJ-ing, graffiti art and break-dancing.

Growing up minutes away from Washington DC, Baker was drawn to the action while the nation watched news from their couches. This coupled with his love for rap led him to figure out a way to get into the music industry, and a writer at The Source noted Baker’s knowledge base and writing skills.

“That’s all I needed to hear,” he says. Though they weren’t hiring at the time, Baker carved his own path, eventually leading him back to The Source, and to several prominent publications from coast to coast.

Baker’s latest works include two series of the books: I’m The White Guy-documenting his life as a rap white journalist, and The Making Of – insight into the creation of recent albums based on in-depth interviews with the artists who created them.

The I’m The White Guy editions featuring Baker’s interactions and experiences with various artists. The Tech N9ne Edition specifically highlights, “how they both used their status as outsiders in the rap industry as motivation to prove their doubters wrong, to show that they both belonged in the world they loved.”

With The Making Of series, Baker seeks to discover what “a real fan would want to know (about the artist)…what they’re going through and what inspires them.” A review of The Making of Game’s R.E.D. Album commanded fans to “’read this book while listening to the album…it gives you so much insight’…that was the goal of doing this series of books. So that was very rewarding,” says Baker who is currently wrapping the latest edition, The Making Of Murs’ Love and Rockets. 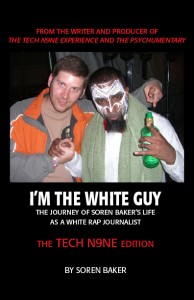 Challenged Lyricists: From Rhymes to The Times

Baker described the trend of the diminishing opportunities in mainstream publications and freelance placement when speaking on the challenges of a career in journalism. This drastic change was “part of the reason I wanted to write books… I didn’t want someone to tell me we don’t want (to cover this story) when I know there is a market and audience for it.”

Challenges in journalism paralleled challenges in music in general. For many, hip hop and rap have a life-altering affect. When people say hip hop is dead, they may be referring to rap’s apparent lack of substance. Baker says that it becomes “harder to (have a life-altering affect) not because of the lack of potency in the music, but because of the volume (of content) we have in our lives…by default you’ll get more bad artists”

Creating a lasting impact comes down to one’s ability to cause “people to believe in (them) above and beyond the music…”, and in the case of journalism, above and beyond the craft. One strategy is to “appeal to a huge swath of people all at the same time, all with dramatically different backgrounds.” Baker used Eminem’s opening line in “Cleaning Out My Closet” to make his point: “Have you ever been hated on or discriminated against?” With one line, “he just appealed to the whole planet.”

Highlights Out of Hundreds

When asked about allies and inspiration, Baker is very grateful to “hundreds.” His main supporters include his wife, Marsha, who worked hard to make the move from Chicago to LA in order to support Baker’s career. He also acknowledges his parents, specifically his father who “continues to be integral in helping me to develop my career…My dad’s been my #1 advocate”. Billy Johnson, Jr. was one of Baker’s mentors, providing him with many opportunities. Johnson got Baker his first opportunity to fly to New York in 1996 to interview his subject – De La Soul. He also notes how Richie Abbott connected him to the opportunity to write and produce VH1’s Ultimate Albums: The Marshall Mathers LP. He also permitted Baker access to his artists including Ice Cube, Westside Connection and Snoop, to name a few. 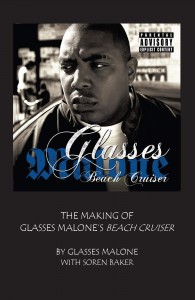 Everything we do is creative, from business strategy to getting the kids to eat their vegetables. It seems to succeed and survive as a creator, one needs “drive, dedication and a sustained effort” that wasn’t required before. The ability to adapt is also essential to create and maintain a presence.

Ultimately, the power is in the hands of the creator, and speaking on the future of hip hop sonically, Baker sees no barriers…“the only limits that are gonna be put onto it, are the limits that people creating it put on it.”

Baker has widened the appreciation for rap music, inviting people across demographics to see beyond dislike of the genre, that he means what he says:

“I love rap. I love music. And I hope that comes through in my writing.”

Sources for more info:
All editions (pictured in this article) can be found on Soren Baker’s author pages here.