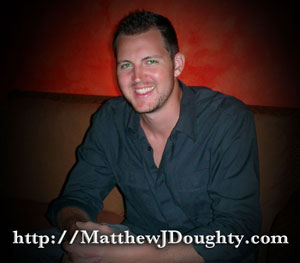 Matthew J Doughty creates CUSTOM MUSIC from his Southern California Pro Tools Recording Studio with an arsenal of Acoustic and Electric Instruments. Though a California native, Doughty Graduated from Belmont University in Nashville, TN with a BBA – Music Business Degree and an emphasis in “AV and Recording Technologies”.

Matthew J Doughty has worked in the Recording Studio with FLEETWOOD MAC and THE KILLERS, among others. MJD has Co-Written with LINDSEY BUCKINGHAM (of FLEETWOOD MAC) and studied under Tom Shapiro (Nashville) and Marty Panzer (Hollywood). MjDoughty’s Music was placed recently in ESPN FILMS and Oscar Winning Writer/Director RON SHELTON’s sports documentary about Michael Jordan titled “30 for 30: Jordan Rides the Bus”.

To build a TEAM in Los Angeles, CA.  To Write and Record Songs and Instrumental Soundtracks for Film, TV, Radio and Games.  To Place Music in Top Notch Entertainment Industry Productions.  Grammys, Emmys, Oscars… How can I help?

– “Tis the set of your sail, and not the gale, which determines the way you go.” (unknown)