By Isil Caliskan. Velvet Ear’s music supervisor Liz Gallacher recently spoke to our group, listened to songs and gave feedback.  This was the 3rd in NARIP’s 6-part series with film and TV music supervisors. 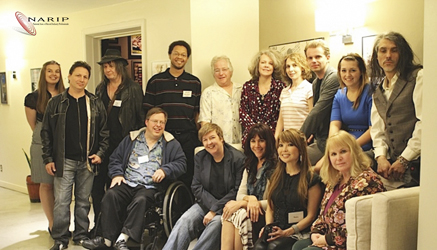 How Liz Searches For Music

Liz keeps her IMBD up to date about the type of music she seeks for current projects. This information is also up to date at her Web site (www.velvet-ears.com). She says, however, that she receives so many submissions that it’s difficult to get respond to everyone.

“Music budgets for films are shrinking instead of getting bigger,” she says, and documentaries usually have even lower budgets.

At the moment, Liz seeks music for a documentary and a science fiction film.  “The director of the documentary doesn’t want traditional source tracks,” he wants something totally unique.  Thus far, Liz has sent over six hundred tracks for consideration for the documentary.  Normally Liz would narrow down selections to 2 or 3 tracks to pitch to the director for each scene or sequence where music is needed.

Another tip: “If your music has a particular part, such as a specific lyric or a spot where it builds, always highlight this. Put significant moment in there and always tag that information.”

To make a song more marketable, Liz advises caution with lyrics, the more general the better. She says, “I do use music with lyrics, but I also use a huge amount of instrumentals. Something very specific [lyrically] is difficult to use.” Sometimes specific lyrics may work if the lyric is repetitive and general such as in Rain Perry’s “I’m Awake.”

She reminded participants to tag their tracks in iTunes and attach keywords such as “female vocal” or “upbeat”.  It’s always helpful she says to “pitch accurately. Give 5 suitable keywords, rather than 25, and be sure to include your contact details.”

In order to manage the huge volume of music she received, Liz creates tons of playlists to keep it organized.

She says that she will remember the music from the NARIP’s Music Supervisor Session “because I’ve listen to the music carefully here and I’ve talk about it with the participants. That definitely helps me to remember it.”

Liz’s feedback to some of the music presented:

Liz liked the eeriness of the Ancient Voices Call submitted by New Pants Publishing’s Robert A. Case and asked him to do a build, and get to her the whole album. She could see the song The Prayer which he submitted over a montage sequence.

Expressive Artists’ Michael Davenport  submitted Fall Baby performed by Mark Lenover. Liz liked the first half, and she thought that it could work really well for Ellysium, one of her current projects.

“Great, I love his stuff, it’s really cinematic, I love the shifts and mood,” she said about Biggi Hilmars’s Anticipation submitted by Respect Music’s Sharon Dean.

“Really great, really cool, exactly the kind of spirit I’m looking for,” she said of the track Come On performed by Melissa Rebronja and submitted by Independent music licensing professional, Peter Kimmel.

“Your music makes me want to smile, it’s positive and uplifting,” she said about songwriter Kristy Landgren’s music.

“Very lovely, definitely file it away for a future project,” she said of the track Airborne submitted and performed by Precipitous Record’s Rain Perry.

“This reminds me of MUSE! It’s great. I like the big feel, it’s really epic,’’ Liz said about Rayko’s Sacrifice from SourceOne Records.

‘Nice, love her voice, it has a gritty earthiness, lived-in-ness to it,” Liz said of the track Long Ago’ performed by Bonnie Pointer and written and submitted by Robin Taylor.

“Goodness! I like it when it started kicking in. Teen Show, vocal, up lifting,” she said about Shooting Star performed by Ruby Freedman and submitted by Robert Walls.

Liz started her career as a Music Researcher and Associate Producer for a number of UK-based TV companies. She then created Liz Gallacher Music Supervision in 1996 and quickly established herself as one of the most experienced and creatively diverse music supervisors in film and television today. Her work on projects such as The Full Monty (winner of a Brit Award for Best Soundtrack) and Resident Evil (Grammy nomination for Best Metal Performance) has garnered praise from producers, directors and the press. 24 Hour Party People was short-listed for Film Music at the 2003 NME Awards. Liz’s film credits also include the Oscar-Award winning documentary One Day In September, Golden Globe winner The Gathering Storm and feature films such as Layer Cake, Calendar Girls and Bend It Like Beckham. Other recent film credits include Best British film winner Fishtank, and the Oscar-winning documentary The Cove. Liz moved to Los Angeles in 2008 and created Velvet Ears in 2010. Named after her dog’s silky-soft ears and impeccable music taste, Velvet Ears specializes in all things music. From Music Supervision to their newest Music Library venture, Velvet Ears has the film and TV music industry covered.