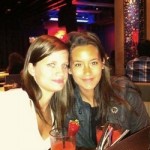 Emelie Adolfsson and Kirstin Görtz (hailing from Sweden and Holland, respectively) arrived in Los Angeles in February. From day one at NARIP, they hit the ground running. Within a short time they have both grown personally and professionally, and NARIP has opened doors and improved their future career prospects. Through NARIP, both have had the opportunity to meet, interact and network with the best of the modern music industry.

As Marketing Managers, they have also helped NARIP a great deal.

Both have contributed useful ideas to NARIP’s marketing such as ways to increase social media and to get important gatekeepers to cover NARIP’s events. They have helped expand NARIP’s presence in Europe, where Emelie specifically has had a strong hand in organizing NARIP activities to launch later this year in Stockholm.

The series has been a hit, with many registrants returning multiple times, and with high-profile placements in the works for several participants. Here’s what a few happy attendees have to say about NARIP’s Music Supervisor Sessions:

Emelie and Kirstin also co-produced four LAMN Jam Music Contests organized by the Los Angeles Music Network, sister organization of NARIP.  Both have been heavily involved in the promotion and production of the series, which enabled them to interact with artists as well as top A&R execs, managers, producers and marketers of rock and urban artists such as Metallica, U2, Lady Gaga, Dr. Dre, Jay Z and The Black Eyed Peas just to name a few.

Working with NARIP has been a great experience, says Emelie, and she has met many new and exciting people. “Being at NARIP made me realize that I want to continue working in the international music industry and help connect people around the world, and to Sweden in particular. I managed to establish meaningful relationships and new business opportunities between people from different countries which I find fun and inspiring. Thanks to NARIP, I am ready to continue with confidence to reach new goals.”

Kirstin is grateful for the opportunity to live and work in Los Angeles. “I came to Los Angeles to immerse myself in this new and bustling world.  From a young age I developed a strong interested in the arts and entertainment industries. I support uniqueness and creativity, and hope both will be part of my career in the future. NARIP enabled me to put my international communication and event management skills into practice. I’m eager to learn and since I’ve had the chance to develop myself tremendously in such a short time, I’m even more motivated to work hard and dream big.”

Both want to thank Ms. Taylor and Team NARIP for welcoming them with open arms and providing them the opportunity to grow into professionals and to aim to achieve new goals.