Some feedback from Julianne to music presented:

The fourth in NARIP’s Music Supervisor Sessions series, this intimate session enabled registrants to prepare pitches in advance, meet Julianne face-to-face, have her listen to their music and receive immediate feedback. 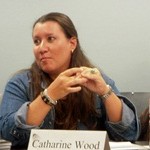 Photo (left): Planetwood Productions’ Catharine Wood.  Says Wood about the session with Julianne Jordan, and NARIP programs in general, “The top level people NARIP brings in give us access… they share details that are so idiosyncratic to the niche areas they represent… it’s amazing. The very specific industry information NARIP is able to provide is absolutely invaluable and available NOWHERE but on the job. All the questions you ask of the experts, as well as what we’re able to ask, fill in so many ‘blanks’ with absolutely critical information. At every NARIP event I attend I’m gaining tools to ensure success in my chosen field of music placement, and I really can’t thank you enough. “

Audio from this session can be purchased at our Online Store.

Julianne Jordan started her music supervision career with a bang when director Doug Liman brought her to a little independent movie called Swingers. The film ignited the “swing” craze in the 90s, spawned a new type of vernacular, and pushed the interest in retro swing music into hyper drive. The soundtrack went gold and Julianne has not stopped working since. Julianne has enjoyed a fruitful collaboration with Doug Liman on all of the films he directed, including Go, The Bourne Identity, Mr. & Mrs. Smith, and most recently Fair Game. Julianne has also supervised such hit films as The Italian Job, Valentine’s Day, Red and Yogi Bear. Julianne’s latest movie is the CGI animated Hop for Universal. She is currently at work on her second Garry Marshall collaboration, New Year’s Eve. In 2007, Julianne supervised the blockbuster family film Alvin and the Chipmunks, where she lent her expertise in helping create an entirely new soundtrack with songs featuring that world-recognized chipmunk sound. Alvin and the Chipmunks is a certified platinum soundtrack. Alvin and the Chipmunks: The Squeakquel, which she also supervised, is well on its way to platinum status as well. Julianne is currently serving on the board of governors of the NARAS LA Chapter. She also had the distinction of winning the first Music Supervisor of The Year Award given by the Guild of Music Supervisors in 2011. No stranger to performing, Julianne is an accomplished violist who studied her craft at Skidmore College.