When Hollywood Goes To Paris 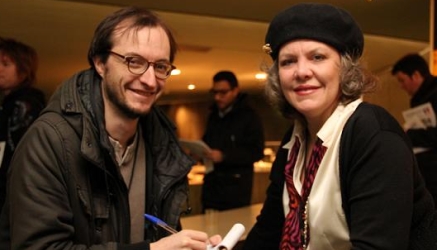 NARIP organized a professional meeting on music supervision for the first time in France last week.  Here is a report on the happenings there.

On April 3rd, NARIP, the National Association of Record Industry Professionals, organized a meeting in Paris with music supervisors that focused on synchronization and the methods used to place music in Hollywood films, television and trailers. Two American supervisors presented their a description of their jobs and needs from across the Atlantic: Andrea von Foerster, music supervisor at Firestarter Music (who specializes in placing music in film and TV), and Marcy Bulkeley, music director at Big Picture Entertainment, who specializes in placing music trailers. Whether for films, TV shows or Web series, the demand is constantly increasing with more productions, and more music needed for each production.

First well-known fact: between 3 and 12 tracks are used for a TV show, whereas in films, the music produced is neck and neck with the original music. The most cited and placed French artists are M83, Phoenix, Air and Daft Punk; however, language (French lyrics) isn’t necessarily an obstacle. “We’re looking for sounds, for music that creates an atmosphere, that accompanies the image,” explained von Foerster, who, just like Bulkeley, didn’t hide her desire to leave France with new sounds in her pocket.

As for musical tendencies, the two supervisors were insistent: “On top of following the trends, we need to anticipate them,” said  Bulkeley. After the Coldplay vogue, the Black Keys are used as a reference for the upcoming fashions, with sound-alikes in constant demand. Along with trends, there are recurring safe bets: “Nowadays, producers ask us for music that sounds like the White Stripes, Pink and Rihanna.” Indeed, big stars are often not affordable, making bands that sound like the big stars more place-able.

Bulkeley gave the following example: “For The Hangover 2, a 2-1/2-minute trailer with tracks by the Beastie Boys, Kanye West and Jay-Z cost one million dollars.” Thus, to satisfy the production without going over budget, supervisors keep looking until they find the right sound that’s within budget: “[We can have] up to 15 or 20 meetings with the [film or television] producer but also the director and everyone working around them,” adds von Foerster.

Major and independent productions are in the same boat. Both have to identify and clear rights before being able to suggest the track that best suits the image… and as quickly as possible. “We have to move fast,” emphasizes von Foerster. To be quick and responsive, the supervisors must store huge amounts of music. “Having an excerpt or edit of one track does not suffice,” she adds. von Foerster and Bulkeley both prefer to receive whole and complete tracks, not edits.

It is there helpful to put together a vast library sorted by theme and atmosphere rather than by genre. And to go fast, rights holders (or those placing music) must also be easily reachable. “We need as much information about the track as possible. Having an email address or a telephone number in the track’s metadata on iTunes, for instance, saves a lot of time,” says von Foerster. Then again, everyone has his/her own preferences in terms of tools, and it is necessary to know who favors what.  Bulkeley prefers Soundcloud which “…allows me to visualize the structure of the piece and find what I want more easily. Even more so since the downloading process is simple.”

von Foerster, on the other hand, does not use Soundcloud.

After the panel, NARIP opened to the floor to questions from the audience.

With the success of this first edition, NARIP Believe Digital are already considering a second session soon, still revolving around music supervision, which is a field that appeals to more and more French music industry professionals and distributors.

One thing to keep in mind is that NARIP is an organization that promotes and develops access and education within the music industry, as well as the establishment of businesses through professional meetings. It is within this framework that NARIP settled for the third time in Europe (following ongoing successful NARIP Music Supervisor Sessions in London and Berlin), and for the first time in France.

Links and Sources For More Info: